The Dutch made their mark in the 2014 edition of the 'Festival international de la BD' in Angoulême, where the Dutch cartoonist Willem was president of the festival.

In honour of Willem, (great Dutch cartoonist, now living and working in France), there was a delegation of 25 Dutch comic artists present in Espace Franquin. Every day they made new silkscreened posters which were posted at several spots in Angoulême, resembling the street culture in the 60s - 70s, the roaring period of Willem's first years in Paris.
Among the artists are Joost Swarte, Guido van Driel, Hanco Kolk, Henk Kuijpers, Peter van Dongen, Jeroen Funke, and Nanne Meulendijks.
A silkscreen portfolio of the 25 best images is now ready.
Price Euro 250.
Size of the silkscreens : 30 x 40 cm. / 12 x 15,75 " All signed and numbered in a edition of 60 copies.
Extra: a book containing all 75 designs and a coverage of the event in Angoulême, a 4 p. booklet of Libération and the diary of Maaike Hartjes 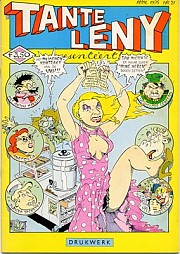